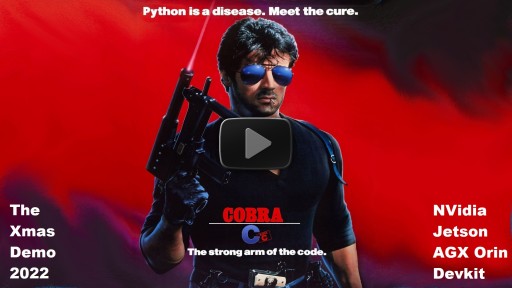 The never-ending saga of recycled Xmas demos continues! We took last year's release and updated it for a newer and slightly more powerful target: The NVidia Jetson AGX Orin Developer Kit [anandtech.com]. Sporting 12 ARM cores 2048 GPU cores, it's like a PC from 2016. (Without the fast GDDR or high clock rates, but yeah, you get the point) Compared to the Xavier from 2016, it's roughly 4 times faster. Instead of wasting that power on 4K or some other crap, we generally made everything better and faster and smoother. We also fixed a busload of bugs and quirks.

The main purpose of the Xmas Demo has always been to reproduce computationally intensive graphical effects on low-end hardware. Anything is possible, as long as one is willing to take the time to understand how things work and write code in languages that don't undermine the underlying CPU. We find it mildly amusing that new programming languages are given names like "Python" and "Swift" when the opposite is true. Appropriate names would have been "Sloth" and "Sluggish". All this is discussed in our book Real Programming.

The code is, obviously, written in the fastest (and greenest) programming languages ever: C and GLSL. It compiles and runs on both Linux and Windows with assorted graphics cards. Download the source and try it out!

From the article C is the greenest programming language [hackaday.com]:

Have you ever wondered if there is a correlation between a computer's energy consumption and the choice of programming languages? Well, a group of Portuguese university researchers did and set out to quantify it. Their 2017 research paper entitled Energy Efficiency across Programming Languages / How Do Energy, Time, and Memory Relate? may have escaped your attention, as it did ours.

An assortment of shaders from ShaderToy have been modified and used. Some were heavily modified, others less so. The archive contains the modified versions. Below are links to the original versions: